the original article can be viewed by clicking on below link.

by viewing the pictures in the article, point mouse to the picture. additional information will show.

cbs and bkd are different governmental instances in the netherlands. both keep record of production figures.

please notice that the method of calculating acreage figures by cbs or bkd is a little bit different. therefore, small differences can show in this data, compared with the previously informed acreage statistics.

translation of the article information is as follows:

the total number of hectares used for flower bulbs continues to increase. acreage of 2017 compared with the acreage of 2000 increased with 18% to a total of 26.000 hectares.

especially tulip acreage has increased in this period of time.

during the same time period, the number of growers continued to decrease.

this means that a smaller number of growers produced a larger acreage of bulbs.

now total acreage of tulips is about 13.000 hectares.

this means that about 50% of the total flower bulb production in holland is taken by the field production of tulips.

the number of growers producing field grown tulips decreased with 46%.

in 2015, there was a small increase in the number of growers. however, the average production acreage size of each grower continued to get larger.

for both lilies and hyacinths, the number of growers decreased. the remaining growers increased the size of their production acreage.

acreage in hectares ( per production year) 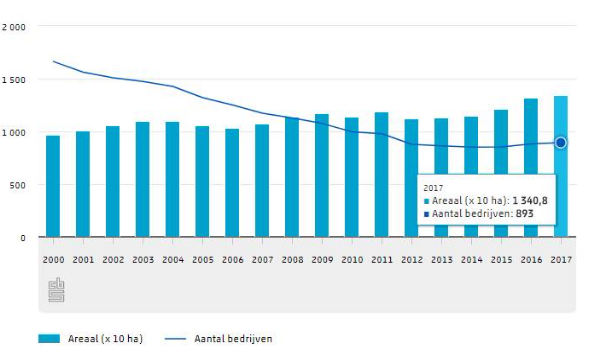 the crops of narcissus and gladiolus kept decreasing over the years 2000 – 2017.

it seems that the decrease in these crops is compensated by the increase of tulip production.

the number of growers that produce field grown flower bulbs decreased over the years 2000 – 2017 by 39%.

the estimated number of growers that produce field grown flower bulb crops is about 1600.

in all flower bulb crops, the number of grower decreased. the decrease was largest in iris and crocus crops.

decrease of the number of growers continues.

increase of acreage per each grower also continues.

the average acreage produced by each grower in 2000 has almost doubled in 2017. 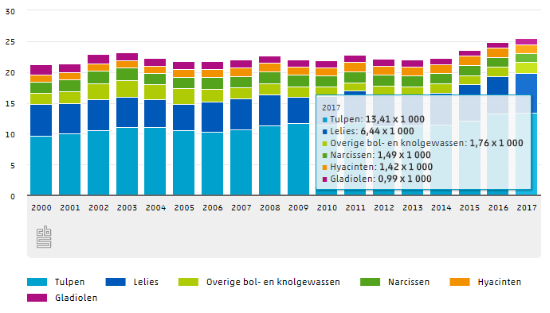 province of north holland was responsible for the largest increase in production. about half of the total flower bulb production of 2017 was produced in north holland.

we can see in the map that the production of flower bulbs is also increasing in other areas of holland. many small production areas are can be found in holland.

· click on the article link as on top of this document.

· point your mouse on the  picture in the article. you will see the number of hectares produced in each area.

(this only works in the original article )

below are details of each province name.